Our  first stop on our 2106 European Tour. We landed at Charles De  Gaulle and found our rental car.  We hadn’t slept in about 16 hours, so this was going to be a challenge. Mont Sainte-Michel s an island commune in Normandy, France and is approximately 4 hours from the airport, which is about 385 kilometres. Along the way we were greet with tolls, so be prepared to have your credit card or cash ready.  At the time of our travels, the cost amounted to approximately 30 EU.  Not alot, but its best to ensure you are aware of this.

The drive is not bad.  Not much to see.  I found it to look very much like a Canadian road trip.  Lots of trees, farms, and some cities on the way.  It wasnt until the last 20 minutes that we saw the castle on the horizon.

From this ditance, it was quite amazing.  It felt so cut off from the rest of the world.  A medieval piece of histoy floating in the water.  As we got closer, the number of cars travelling in the same direction started to increase.  This is when I realized the ever so present tourist aspect of this attraction.

We parked the car which seemed quite far from the castle town.  The parking was 11.70 € which permitted a whole day of visit. The attraction provided shuttle busses to the island commune.  The shuttle itself was quite nice and the ride lasted about 15 minutes.

Once at our destination, we noted all the tourists.  It was quite busy.  We still had to walk a bit to get to Mont Saint-Michel.

Finally we are inside.  One really feels a sense of stepping back in time.  Narrow cobblestone streets, old wooden signs and of course souvenir shops.  Everywhere.  Postcards, fridge magnets, keychains… everywhere.

We had heard that eating inside the attraction was quite expensive, so we decided to eat after our little trip.  We found that all the restaurants were the same throughout.  La Mère Poulard Café was stationed all over the area.  It is then that I realized that it is owned by one or several families.

We spent about 2.5 hours throughout the commune.  It was kind of fun finding little paths and trails that take you off the beaten track.  If you like to photograph, you may find this appealing, however, don’t expect to find many areas without other tourists in your shot.  Lots of people.

All in all, Mont Saint-Michel is a really cool place.  I do recommend a visit.  But, as in my case, once you’ve seen it, you will probably be done with it.  Personally, I found it too touristy, but enjoyed it none-the-less. 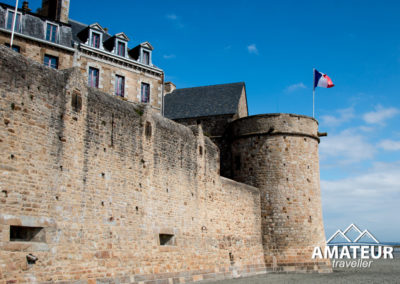 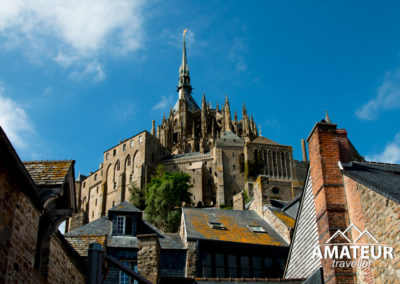 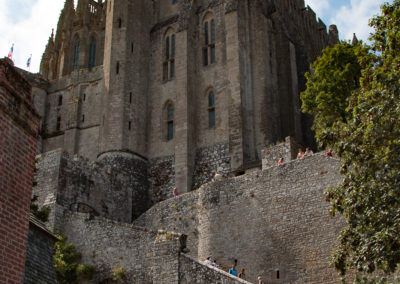 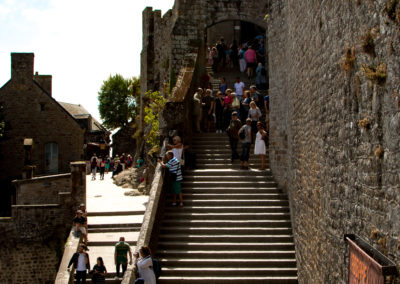